On Friday afternoon we demoed the second, and brand new, version of the Crafts Study Centre augmented reality (AR) app to students at University for the Creative Arts.

Originally our lead academic, Adrian Bland, had envisoned AR as a ‘portal to another world’ these discussions resulted in the AR app developed last year. However since then Adrian has revisited his thoughts about AR and also aligned it even more closely with education by using AR in the context of a particular essay question about the maker David Pye and his book The Nature and Art of Workmanship. 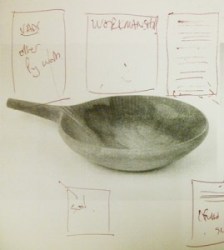 Screenshot of the AR app.

Armed with 3 iPads and 1 mini-iPad, the students (the same group as the January session) were given the chance to try out the AR app informally and this was followed up by further discussion around the topic of AR in education. The key points from the discussion and exercise were: