As my Dante course is the first one of the SCARLET pilot modules to run this year, I thought it would be useful to write a blog post detailing how we’ve pulled together the digital content.

Unlike most other university courses on Dante’s Divine Comedy, my course is not primarily concerned with interpretation of the poem, but with the ways in which book technology has framed and mediated this text since the fourteenth century. The course title, ‘Beyond the Text: The Book and its Body’ is designed to show this focus on the ‘container’ (i.e. the book) and not the ‘contents’ (i.e. the poem).

The course is a kind of cultural history of the poem as seen in the books (and other media) in which it’s been published, and so its new incarnation in Augmented Reality is simply another stage in a long-standing process of technological development.

For the AR app, I’ve put together the Dante content by working backwards from the course’s learning outcomes and assessments. In terms of objectives (learning outcomes), students who satisfactorily complete the course are supposed to be able to:

while for assessment, they submit three pieces of work:

The individual case-study of the book-object is at the heart of both the learning experience and assessment on the course: every student  ‘adopts’ a Dante book from the University’s Special Collections and researches it in great detail for their first essay, looking at it both in terms of the production context (i.e., the individuals involved in its making) and its material features (such as the binding, the paper, the page design, and the way in which it presents Dante’s text). Students are also encouraged to derive the provenance history from the book-object and the library’s records, with the result that their submitted essays amount to a ‘biography’ of a single book, as it travels through time and space and into the Rylands collections.

As well as a number of unique Dante manuscripts, the Rylands holds almost every edition of the Divine Comedy printed between 1472 and 1629. For the SCARLET project, I narrowed this down to 10 key ‘objects’, that is, 10 editions of the poem which are particularly important in terms of the publishing and or/intellectual history of the poem, all published between 1472 and 1555. These include the first printed edition of the poem (Foligno: Johann Neumeister and Evangelista Angelini, 1472), first edition with supporting material such as an author biography and commentary (Venice: Wendolin de Spira, 1477), first fully illustrated edition (Brescia: Boninus de Boninis, de Ragusia, 1487), and first pocket edition (Venice: Aldus Manutius, 1502).

I recorded the objects and the digital assets (the Learning Design Template) in an Excel spreadsheet: 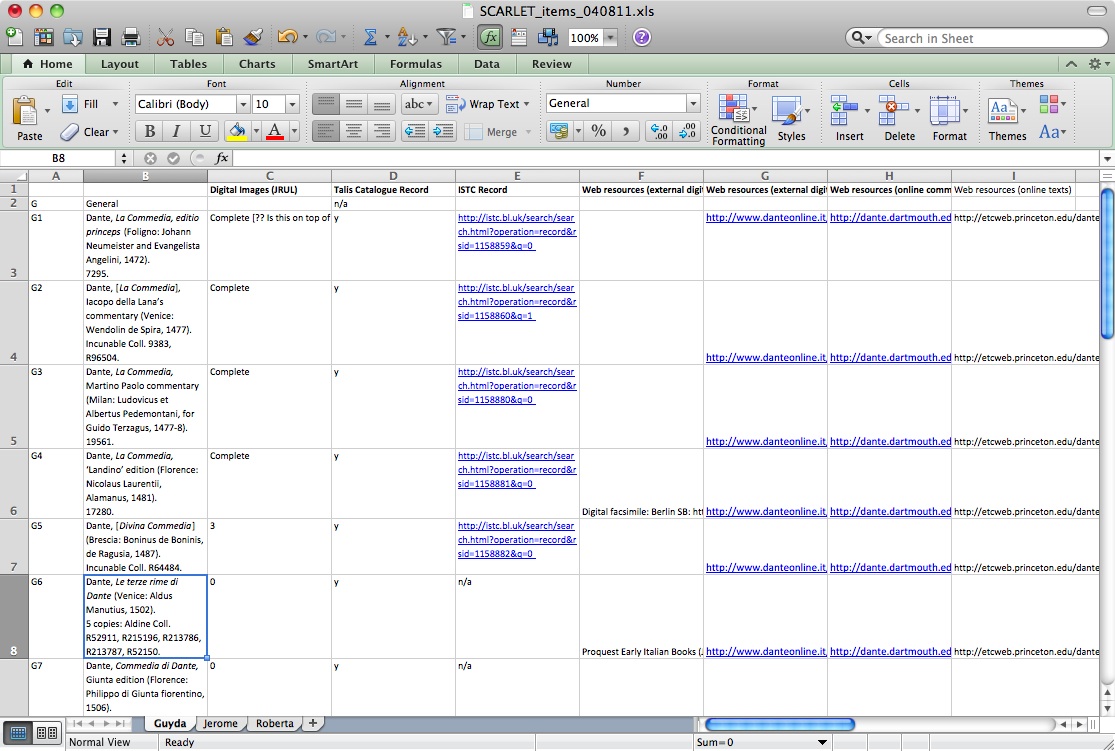 The 10 identified objects are in the first column, and additional digital assets have been added in further columns to the right. For every object, we’ve included links to a few key resources: the JRUL TALIS catalogue record for the book and the ISTC record, plus a number of key online Dante resources which will help the students decode the information on the page. These include the Princeton Dante project (for critical text of the poem plus English translation, and audio track), and the Dartmouth Dante project (a searchable database of the commentaries included in some of the editions).

I’ve also included links to as many different digital images of these and other editions as possible. Every object links to the Italian Dante Online website, which has full digital facsimiles of about 40 manuscripts of the poem. In addition, three of the objects have been photographed as part of my Manchester Digital Dante project, and so students can view the entire book remotely via Luna Insight. I’ve also included links to other digitized copies of these editions hosted elsewhere, where available, which will allow students to directly compare the Manchester copies with other ones.

Finally, for certain items I’ve included links to digitized readings available via the library electronic course reading list. This will allow students to go straight from the book-objects themselves to a number of key readings about the editions . We also hope to include links to my Manchester Dante project website and the University of Manchester’s VLE space for the course when these go live in a few weeks’ time.

My hope is that the SCARLET app will not only provide a usable way of delivering teaching material, but will actually become part of the wider discussion of text technologies and their effects which is central to the module.

Moreover, since one of the key objectives of the course is to guide the students into a comparison of the development of book design, the AR app will allow a more direct comparison of the 10 selected objects than we’ve been able to do in previous years of the course. I’ve tried to incorporate the comparative (and object-oriented) aspect throughout as we’ve storyboarded the processes, so the GLUE-object image is a photograph of the first page of Inferno 1 in each of the books, while the landing-page contains a photograph of the front cover of each book. The visual identifier link to each of the Dante books will therefore underline the relationship between the digital and the physical object, while also providing more high-quality content which can be used for the course itself.

1 thought on “Capturing the Dante content and digital asset gathering”