This is the third in a trio of blog posts inspired by the workshop led by Team SCARLET on Friday 7th December at University for the Creative Arts (UCA). The other two blog posts deal with the CSC’s working prototype AR application and with a lecturer’s perspective on AR.

Attendees from UCA to the workshop included lecturers, curators, learning technologists, librarians and archivists. Matt’s presentation gave a really good overview of what augmented reality (AR) is and how it can be used in lots of different settings; this was complemented by Guyda’s presentation about her experience as an academic working with AR for the first time on the original SCARLET project (JISC, 2011-12). 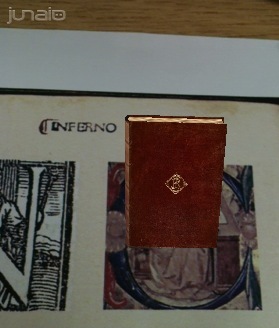 A 3-D model of an edition of Dante’s Inferno 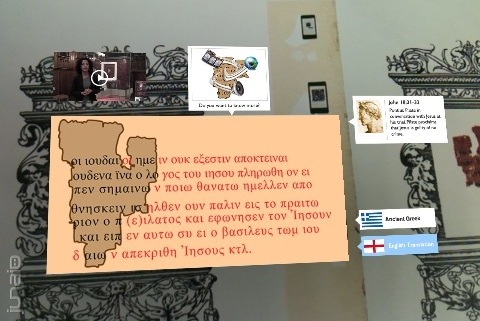 AR shown over a fragment of the Gospel of St. John

Guyda highlighted the augmented reality that is available for fragments of the Gospel of St. John; this includes placing the fragment as part of the whole original text, an English translation of the Ancient Greek original, a video, as well as a wealth of additional contextual information.

Key points from the discussion:

At the end of the workshop participants were asked ‘What was the most useful aspect of the workshop?’ and ‘What would they like the next workshop to include?’ responses (on postit notes) from different lecturers included:

“I now know what Augmented Reality and QR Codes are!”

“It’s made me think about how students search, record and document again.”

“What was most useful? To see how material culture studies can take this technology further in this type of institution to contrast with a university classroom setting.”

“Very exciting to see demo and explanation of thinking behind CSC use of Augmented Reality – set my brain thinking in several directions about the applications to my own work.”