As previously posted I am working with the Vivarium team at Manchester Museum as part of the Mapping the Museum Project. One of the main objectives of the project involves illustrating the spatial distribution of 20+ amphibians and some reptiles to reflect all the species that live at the Vivarium. The tool selected for the final visualization was Google Earth as this is a freely available tool which anyone can download and use both at home or in a classroom.

The challenge…. To find a dataset where the spatial distribution of amphibians and reptiles have already been mapped.

The solution…. The International Union for Conservation of Nature (IUCN) 2013 Red List Spatial Data Download. This is a fabulous site allowing you to download for free a zip file containing a shapefile for all amphibians and reptiles. Other data is available too e.g mammals, corals, birds, marine fish, mangroves, seagrasses and cone snails.

The shapefile from IUCN can be viewed in a Geographical Information System (GIS) such as ArcGIS or the open source QGIS. In ArcGIS I opened up the attribute table for the ALL_AMPHIBIANS_NOV2013.shp file and used the Select by Attributes function to obtain all spatial location records for a particular species e.g. Oriental Fire-bellied Toad, Bombina orientalis. The selected data can then be exported as its own shapefile which I called bombina_orientalis.shp and can be viewed in ArcGIS. 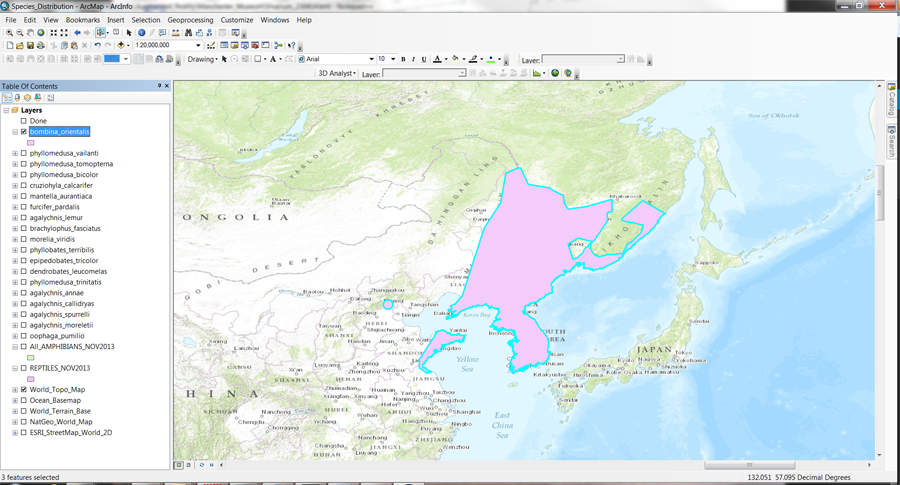 Spatial distribution of the Oriental Fire-bellied Toad in ArcGIS using the IUCN dataset.

Keyhole Markup Language (KML) is defined by Wikipedia (2014) as ‘an XML notation for expressing geographic annotation and visualization within Internet-based, two-dimensional maps and three-dimensional Earth browsers’. KML is used for Google Earth visualization and hence the shapefile (bombina_orientalis.shp) needed to be converted to KML. Using the tool Layer to KML in ArcGIS I was able to convert the shapefile into KML and view the Oriental Fire-bellied Toad polygon in Google Earth. 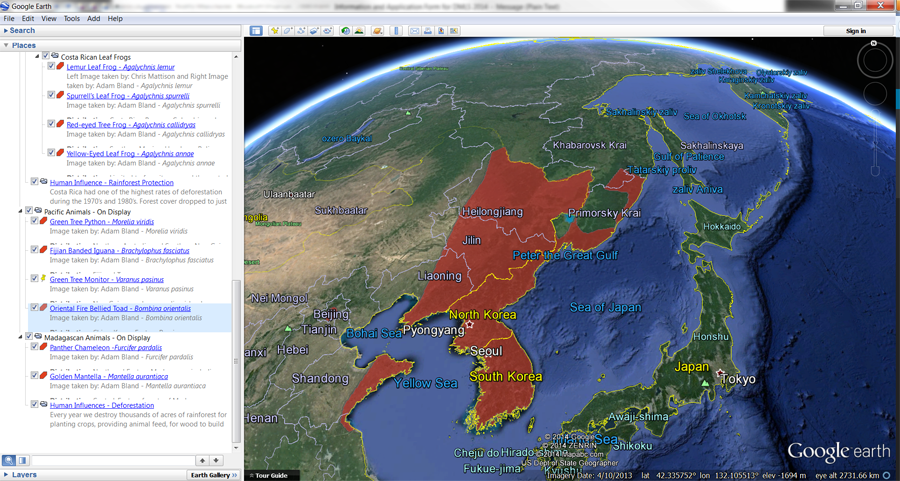 The KML defines a string of geographic coordinates within the following tags: MultiGeometry, outerBoundaryIs, LinearRing, coordinates. The coordinates in Geo-Global (EPSG 4326) provide the location values required to visualize the spatial distribution of the Oriental Fire-bellied Toad (as shown above).

Additional information can then be provided about the species itself such as: 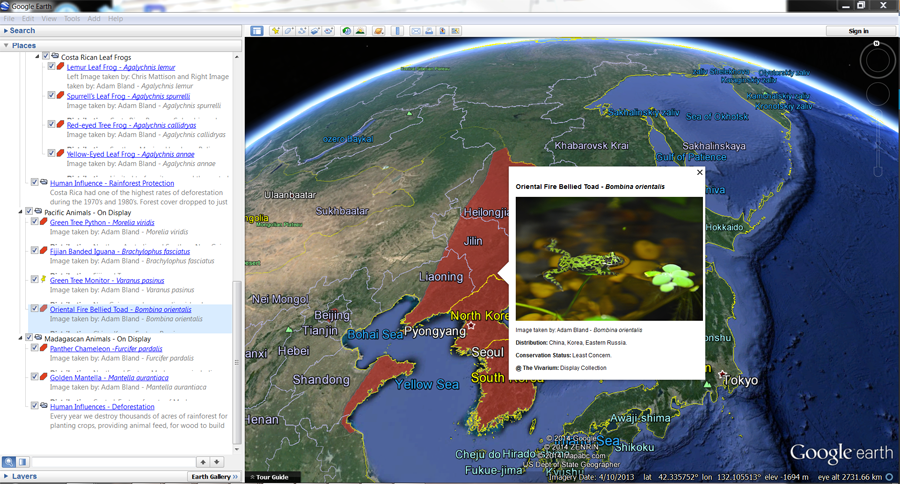 Further information provided about the Oriental Fire-bellied Toad with a relevant link to the Vivarium Frog Blog.

The methodology detailed above has been repeated for all species found at the Manchester Museum Vivarium. However for one particular species the Lemur Leaf Frog, Agalychnis lemur the spatial distribution from the IUCN (green polygon outlines on the map below) was edited by Andrew Gray, Curator of Herpetology, whereby he felt the red polygon outlines on the map below reflects the most up-to-date spatial extent for the critically endangered Lemur Leaf Frog, Agalychnis lemur. 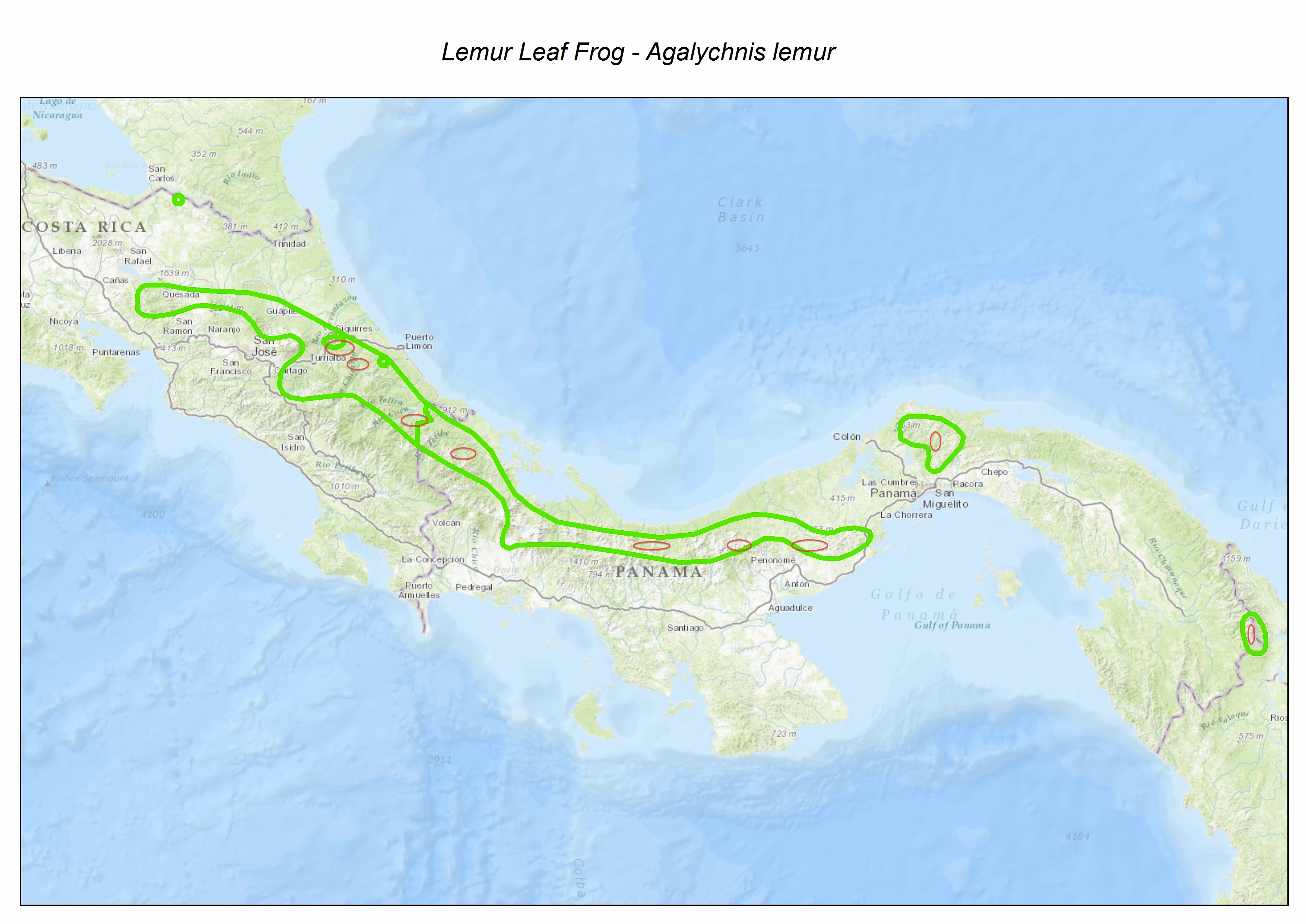