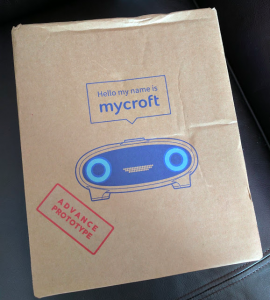 Mycroft AI is the product of a Kickstarter campaign from Joshua Montgomery, who conceived back in 2015 of a voice activated digital assistant (like Apple’s Siri or Amazon Alexa) that was completely open source, built on top of an open hardware platform. Fast forward two years and $857,000 from crowdfunders and investors, and the first 1,000 units have just gone out to supporters around the world.

Watch me unbox the Mycroft AI Mark 1 “Advance Prototype” and take it through its paces:

Mycroft is really interesting for a variety of reasons:

So from an edtech perspective it’s easy to see Mycroft being used as a hook for teaching advanced hardware and software concepts and project work. And perhaps we’ll see DIY Mycroft kits turning up in maker families’ Christmas stockings before long too!

It’s also important to keep in mind that Mycroft’s developers see it as a white label digital assistant that (for example) organisations could customise for their own needs, retaining full control over the hardware and software – unlike the black box solutions from the tech giants. There could be quite a few use cases where this total control turns out to be a key requirement, e.g. from financial services to the defence sector.

I’ll have more to say about Mycroft soon, but in the meantime do leave a comment and let me know what you think about it, and how you might use it in research and education…