Last year was a great year for everything AR, VR, and 360 filming – all the big names from Apple, Facebook to Samsung have contributed to a massive breakthrough that pushed immersive experiences into the hands of people. From Apple’s augmented reality technology ARKit and its rival Samsung’s ARCore to Samsung Gear 360 (2017) camera latest release not limited to Android users, we can not only experience immersive experiences but also quickly create our own without much more than a mobile phone.

We have recently received the Samsung Gear 360 (2017) camera to join the Jisc Digi Lab kit. So, what is a 360 camera and what can we create with it? 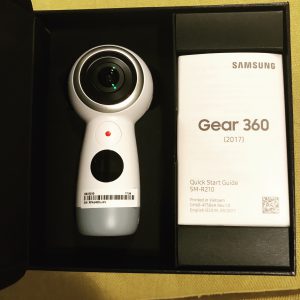 I am starting a series of blog posts on my recent experimentation with SamsungGear360 to give some insight into the technology, how to use it, and its applications in the educational space.

360 cameras can be dual or multiple lenses attached to each other, and they take 360-degree spherical images and videos that can be Monoscopic or Stereoscopic. Because Facebook, YouTube, and Vimeo started supporting 360-degree content, you are now able to view and share any 360 images or video on a web browser – just pan around with your mouse cursor, or on your mobile phone – just rotate your phone around to view your 360 videos/images.

This is a new viewing paradigm, for well over 100 years, we only looked into screens limited in their peripheral.

“With 360-degree cameras, the field of vision is opened up to a dimension we’ve never had to deal with before”.

John Bucher said in his book Storytelling for Virtual Reality.

You may have seen one of your Facebook friends streaming their birthday party live as a 360 video, or live streaming a concert you wished you could attend, bringing an extra level of immersion through your mobile device.

Technologies like this literally blur the boundaries between us and other people, spaces and cultures. Using a Virtual Reality headset such as Google cardboard cannot only transport you into these places and cultures but allow you to live vicariously through another person’s eyes. 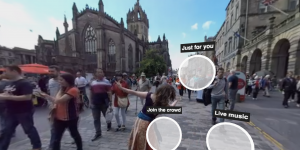 This new form factor has brought massive opportunities to content creators – through Samsung Gear 360 you can shoot and record a 360 video that could be content for a Virtual Reality experience.

For some experiences, you wouldn’t need to create a whole CGI environment to build a 3D world and 360 experiences do not necessarily require multi-headed professional cameras that require a significant amount of stitching work afterward. The mobile app accompanying the camera stitches images and videos automatically so you can immediately load them and share them with others – unlike other cameras that require significant editing to share the content.

This is great news for teachers and those who have limited time and money to spend on creating and learning how to develop 360-degree content.

360 cameras and in particular the Samsung Gear 360 have been used by journalists at BBC and NEW YORK TIMES to capture and tell immersive stories. If you are a teacher and you’d like to explore this area more, you could put some content together within a very short time. In addition, there are different tools that can add interactivity to the experience such as Thinglink. The University of Southampton is experimenting with this tool to create interactive field trips – adding annotations to any 360 videos using Thinglink could enable you to build a more guided, engaging and meaningful learning experience.

Furthermore, teachers or students wanting to explore 360-degree experiences for teaching and learning, they could find plenty of videos online produced by someone like NASA and the BBC for example – say you want to make a particular science class more interesting and engaging for students, go to NASA360 Facebook page and you will be able to take your students to the red planet through a classroom activity that is more fun.

While 360 videos are very good at allowing users an experience of a place otherwise inaccessible, it can also be used to prepare your students for future employment. At medical schools, 360 videos are being used to prepare their students to go to emergency rooms and deal with emergency situations. This emotional and cognitive readiness can have a significant role in lowering stress and anxiety level among students and even junior doctors.

Filmmakers and journalists have found 360 videos a great medium to bring immersive stories in new ways that could impact people’s behaviours. Journalists have realised that 360 videos can be a game changer for storytellers as a new format of stories emerges with this technology. Journalists and storytellers are now able to give roles to viewers – what is it like to be an autistic teenager!? The Party experience which is the Guardian’s latest virtual reality 360 film offers a glimpse into how autistic people feel and cope with a depressing situation such as a social event. Through this experience, you will enter the world of an autistic person, then the emotional aspect will kick in. I believe this is a powerful medium that enables having shared experiences enhancing empathy and encouraging people to act and change their behaviours or reactions towards life situations and issues. The emotional journey of the audience through the experience is very crucial in communicating ideas about mental health, bullying situations, racism, and even more international issues such as climate change.

“powerful changes can be induced in people who have these experiences, even to the extent of decreasing feelings like racism or understanding the consequences of your own actions towards others.”

360 filming and immersive storytelling are being taught as part of university journalism programme courses at Stanford University in the US as they are believed to impact the audience in ways not possible with other journalism mediums.

Next blog to follow on shooting and filming in Samsung gear 360 camera.

For now, join me at our  Digifest conference next week for a show & tell session on 360 camera/filming, I will be in the Digilab area so if you are around, please stop by.